Why Do Good Clinicians Remain Loyal To The System? 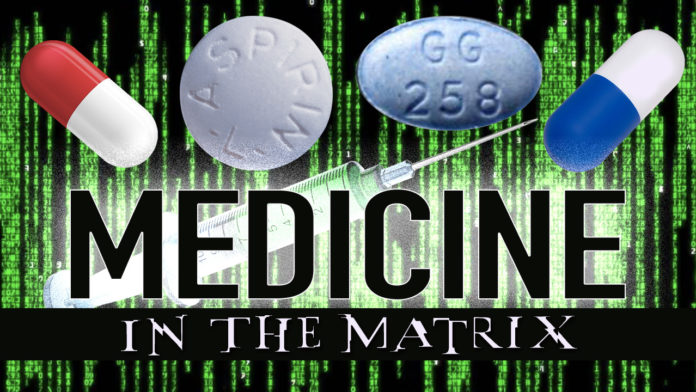 The truth is that healthcare is a designed system. A system where the truth can be hidden in plain sight and individuals can be controlled whilst believing they are free. In one of my favourite scenes in the Matrix movie Morpheus shows Neo the hold the system has on the individuals in the system: 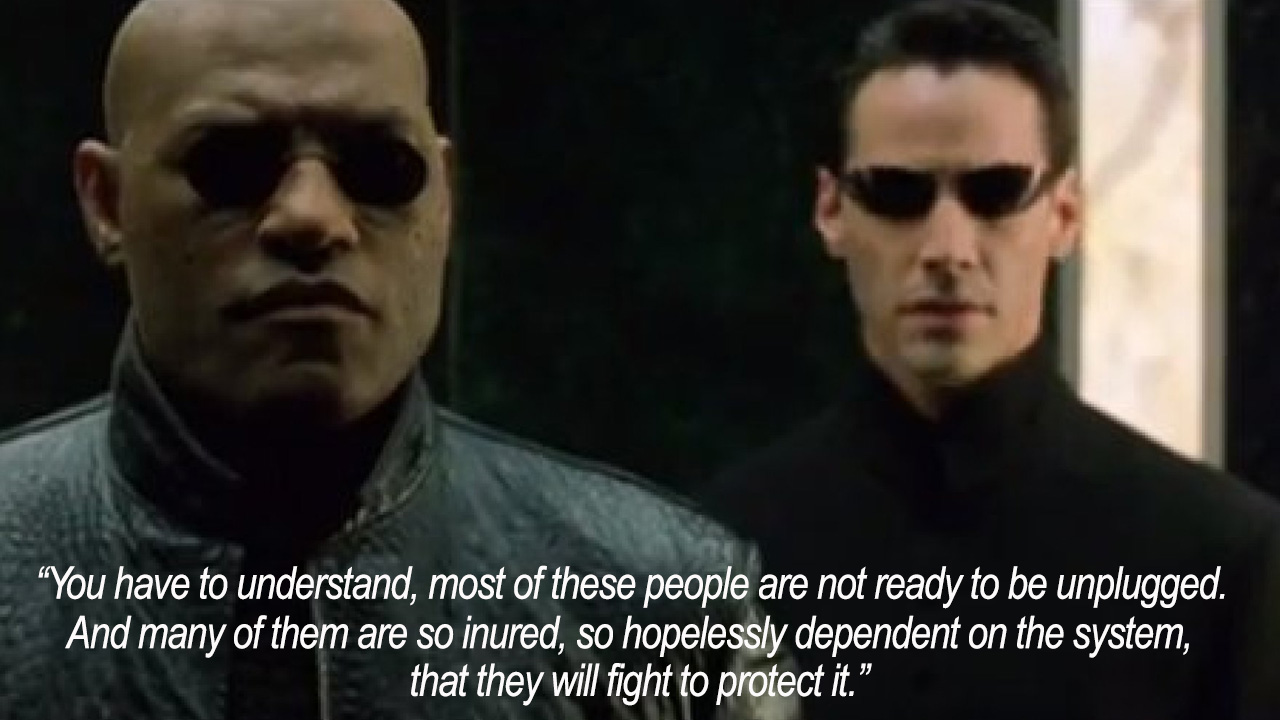 Our interactions with the modern healthcare system most likely occur with little awareness of the human effort that has gone into designing and perfecting the system. The Western allopathic healthcare system may only be 110 years old, but it was founded on much older beliefs, practices and structures. Organised healthcare has existed for thousands of years and does not exist as an island in our society, it is part of the wider societal system. To understand the behaviours of the clinicians in the healthcare system we need take a broader view of human behaviour in the Matrix.

As a newly-qualified pharmacist I was an idealist. I believed or perhaps wanted to believe that everyone always acted in the best interests of society and the greater good of humanity. I was frequently disappointed and confused by what I saw in the healthcare system. For many years I attempted to help other clinicians see a better way of organising healthcare to deliver better outcomes for patients. My well-intended efforts to bring about change were almost always resisted by individual clinicians or committees of clinicians and executives. A life-long NHS executive once told me that the healthcare system always reacts to any stimulus to change in such a way as to preserve the original form of the system. Another asked me to “slow down” to ensure that the boss didn’t realise some execs were not actually working that hard.

I came to understand that my idealism was never going to be a match for the system. I now accept that the healthcare system has been very carefully designed for the benefit of those that designed it and not for the benefit of patients. I still believe that almost all clinicians join the healthcare system to help patients. I also believe that the majority of clinicians think they are providing high-quality evidence based services for patients. Sadly this is not the case today, as few healthcare systems are capable of demonstrating that they are achieving good outcomes for their patients.

The western allopathic healthcare system thrives on the division of the practice of medicine into specialisms and sub specialisms. Whilst this may seem logical as humans are very complex biological organisms, the result is often the management of illness as a dysfunction of a single organ or tissue with less attention being paid to the whole human. Patients requiring investigation by hospital doctors frequently have to attend multiple appointments with several doctors who each specialise in different organs, rather than see a single doctor who can consider the whole human body.

Doctors are trained to diagnose illness from the vast number of diseases categorised by the allopathic system. Few doctors invest their time in trying to address the behavioural or other factors that are causing the illnesses in their patients. The system is designed to produce clinical diagnosis codes that match the symptoms the doctor has observed. The next step is usually to prescribe a drug or refer a patient to hospital for further investigations that can result in surgery and other interventional procedures such as radiotherapy.

Disease is a play on words. A human with an illness is actually in dis-ease

Models of healthcare that have evolved over thousands of years that take a more holistic and environmental approach to managing illness are often described as quackery by allopathic doctors. This is a learned response, often coming from a position of little or no knowledge of alternative treatments and quickly closes the door to therapies which may be effective that do not involve a drug.

During their training medical students are worked extremely hard and soon learn to reproduce what they have been taught and not to challenge the system. Medical exams are more a test of memory and recall than a test of expertise in delivering human health. High workload and an intolerance of challenge to authority produces doctors that are too busy or not inclined to do their own research. Most practicing doctors believe the information they are provided with by health authorities and follow the guidance that they have been given. My previous blog demonstrated how easily the lack of effectiveness and evidence of the harmful harm of a new drug can be removed from the materials that are provided to the front line.

Status, power and money are corrupting influences on clinicians. The fear of losing status, power and money certainly has a very strong influence on clinical behaviour. Even when an individual clinician wants to follow a different treatment course, the system often makes this difficult or even impossible for the clinician. Individuals learn to conform with the clinical practice of their colleagues and conform with the system. There is a very strong human survival instinct to conform with your tribe even when you may have a different belief. A simple experiment that demonstrates this was conducted by Solomon Asch in the 1950s:

A recent conference of young doctors in the UK discussed the issue of student debt as many of them had accumulated debts of over £100,000 during their studies. The debt figure in the USA is almost certainly higher. Debt ensures that doctors remain compliant with the system; they are shackled to the system that pays them until they repay their debt which in many cases will be when they retire.

Fear itself has a very powerful influence on behaviour and reduces or even removes objective thought and critical thinking amongst clinicians. This has been particularly evident during the recent ‘pandemic’ where the fear of death has become very real for clinicians of all ages.

When doctors are busy and stressed, they come to rely on pattern recognition to decide how to manage patients. When time is short, a collection of symptoms and test results that fit a previously observed pattern can be used to diagnose an illness and then prescribe the appropriate treatment. Of course, we all use pattern recognition to navigate our environment; it is an essential human survival skill. But in the busy healthcare environment, pattern recognition can lead to not fully understanding the condition of the patient and can result in harm or much worse. To experience how powerful predictive programming can be for yourself, please take a look at the following video:

Everything looks like an nail when you only have a hammer

Whilst individual drugs are tested in clinical trials, combinations of drugs are not tested before they are used. Not too long ago a patient that was taking five drugs regularly was described as somebody being treated with poly-pharmacy. Today, it is not uncommon for patients to be treated with 10 or perhaps even 15 drugs on a routine basis. No clinician can possibly begin to understand the interactions of 10 or more drugs that are routinely taken by their patients.

No dis-ease is caused by the absence of a drug

Doctors are very good at adding new drugs to the treatment regimes of patients. Pharmacists working in hospitals and general practices often spend a lot of their time stopping drugs that have been started by doctors. Many doctors have experience of patients nearing the end of their life who have most or sometimes all of their drugs stopped and then start to recover unexpectedly. The maxim of less is more has never been more appropriate than in the context of human health.

A large majority of patients have been educated to believe that healthcare is concerned with health. Why would anyone think differently? In reality, healthcare is a business and all businesses need customers. There is no money in healthy or dead patients, so the best business model is to have the largest number of unwell patients.

Once an individual has surrendered the management of their health to a clinician they have become disempowered and are dependent on the system. They keep coming back to the system expecting solutions to the problems that are increasingly being created by the system.

How do we move towards health?

So where do we go from here? Sadly, my experience has taught me that the existing healthcare system cannot be changed into one which is designed to put patients first.

It is now time to stop conforming and to start reforming

We must place our energies and actions into building a TRUE healthcare system that is designed within our communities. The future of health lies outside the system – beyond the MATRIX!