[COMEDY] In Honor Of The Late Trevor Moore: “Time For Guillotines” 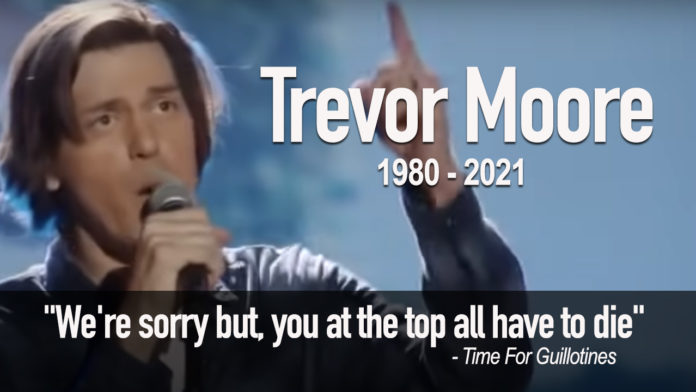 This past August 7th marked the one-year anniversary of the death of one of comedy’s most fearless talents, Trevor Moore.

He was known for being one of the founding members, alongside Sam Brown and Zach Cregger, of the New York City–based comedy troupe the Whitest Kids U’ Know (WKUK), who had their own sketch comedy series on IFC (Independent Film Channel) that ran for five seasons.

On August 7, 2021, at the age of 41, Moore died after being involved in an accident at his residence resulting in blunt force head trauma.

His 2015 Comedy Central special “High In Church” is an absolute masterpiece in standup comedy.

In honor of this gifted, young talent that was taken from us way too prematurely, please enjoy the finale of that particular evening, the ever-so-relevant “Time For Guillotines”

Remembering Trevor Moore Through Some of His Funniest Work:
https://www.vulture.com/article/remembering-trevor-moore-through-some-of-his-funniest-work.html

In Memory of Trevor Moore: The Best Whitest Kids U’ Know Sketches:
https://www.pastemagazine.com/comedy/trevor-moore/trevor-moore-best-sketches-wkuk/